In this post, we will clear up any confusion between malleable iron and cast iron and go through the different materials that fall under the cast iron umbrella. We will explain what sets malleable iron apart and what applications best suit each material. Let's take a look.

Due to their extreme brittleness, cast iron fittings should never be used in plumbing applications. Understanding the difference is key to ensure you are selecting the correct material fitting for your application. Below, we have four materials that fall under cast iron, grey, white, malleable and ductile.

material due to the weight. Grey cast iron's strength is comparable to low or medium carbon steel, but it has less tensile strength and shock resistance compared to steel. Common items made from grey cast iron are well caps and well seals.

White cast iron was used in both cast iron and malleable iron fittings. White cast iron has a presence of cement that gives off a white surface, hence the name. White cast iron is too brittle for many structural applications but with it's good hardness and abrasion resistance, it can be used in many applications including teeth of a backhoe's digging bucket and lifter bars in ball mills. This material is also relatively low cost.

Malleable iron starts out as white iron casting but is then treated at a heat of roughly 1,650°F, 900°C. Malleable iron contains more blunt boundaries opposed to flakes, which eliminates the stress concentration problems that grey cast iron can cause. Malleable iron has properties that are very similar to mild steel. 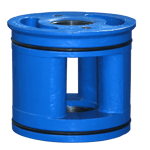 Ductile cast iron is a more recent development. Small amounts of magnesium is added. Ductile iron is very similar to malleable iron, but parts can be cast larger compared to malleable iron where there is a limit of how large the part sections can be cast. Blue, electrostatic epoxy paint is added to items like pitless spools, well seals and well caps for corrosion resistance.

In 1973, the verbiage changed from pound to class, we no longer refer to a malleable fitting as 150 pound, the proper term is class 150. It is important to remember that the pressure rating of a fitting depends on the temperature of the materials to be used with. Usually, the class of a fitting is the maximum pressure at the highest temperature. For more information on temperature and pressure ratings and how it pertains to malleable fittings, check out our Webinar Temperature and Pressure Rating 101: Understanding the Difference.

Every material has applications where they work best and knowing all the information guarantees the correct material is used. Malleable iron has become a popular material in the plumbing industry and knowing the origin of the material ensures it is being used correctly in the applications it is designed for.

What is Polybutylene Pipe?

At BoshartU, our goal is to equip you and your team with the knowledge you need to be more successful. We regularly publish new blogs and content that will help you become more comfortable and confident with our products.